INTRODUCING COMPONENTS WITH PROPS .. AND MORE 🤩

This is a new big step for Overlay on our journey to generate code that developers can reuse, and like doing it. Starting today, exported components will include content props for :

Also, we wanted to make it flexible for Overlay users. It is now, and you can easily :

Here is how it looks :

We have dedicated these last weeks to understand users need and improve the way they export components, and above all, make it way faster. In particular, many users in their design tools used icons and backgrounds as Symbols/Components. And this to override them easily in their design. Before, they had to export them first as dependancies components in Overlay.

Now, with Overlay plugin, you can decide, in one click, to export them :

Here is how it looks now in Overlay (for example in Figma) : 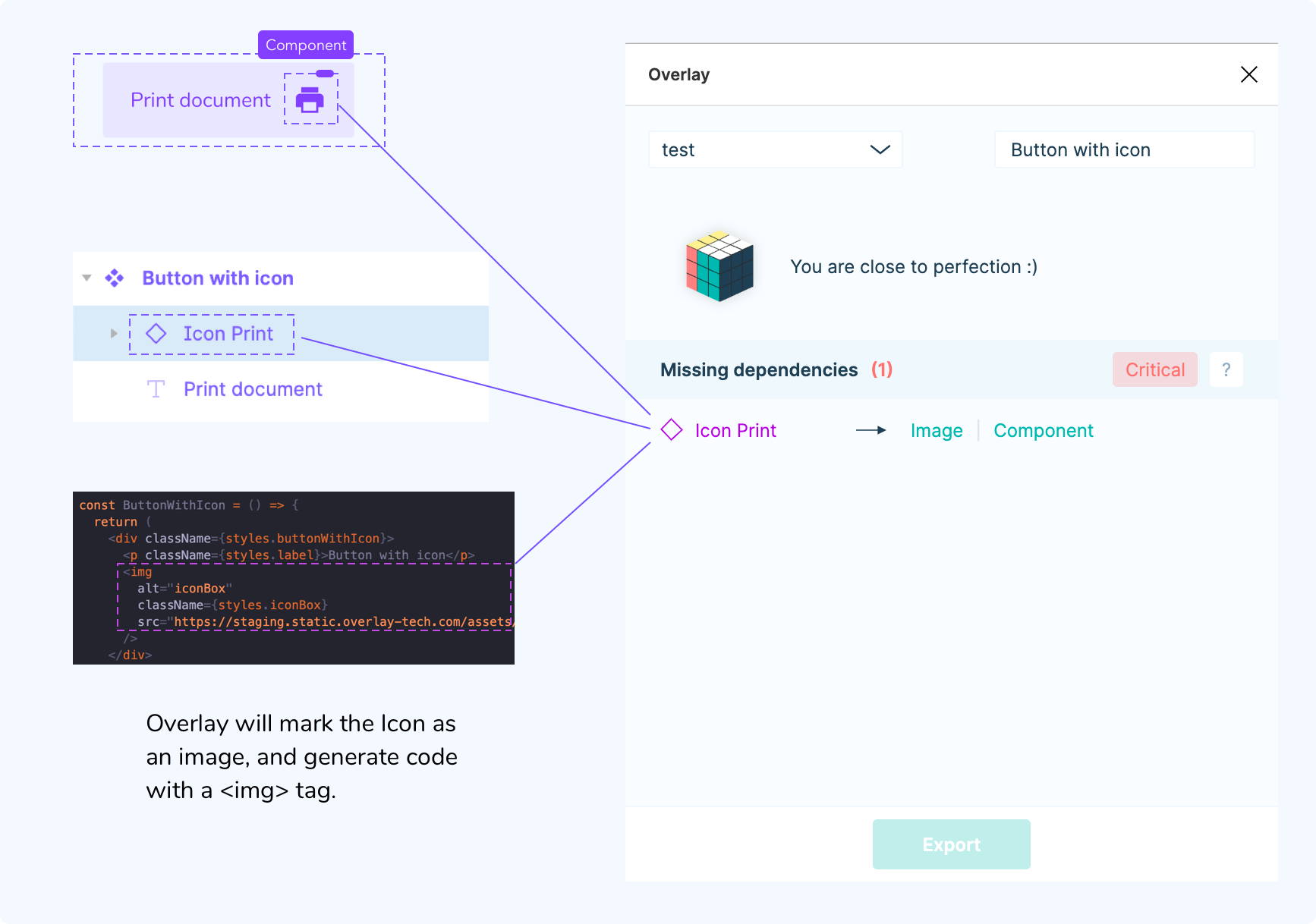 Here is how it looks now in Overlay (for example in Sketch) : 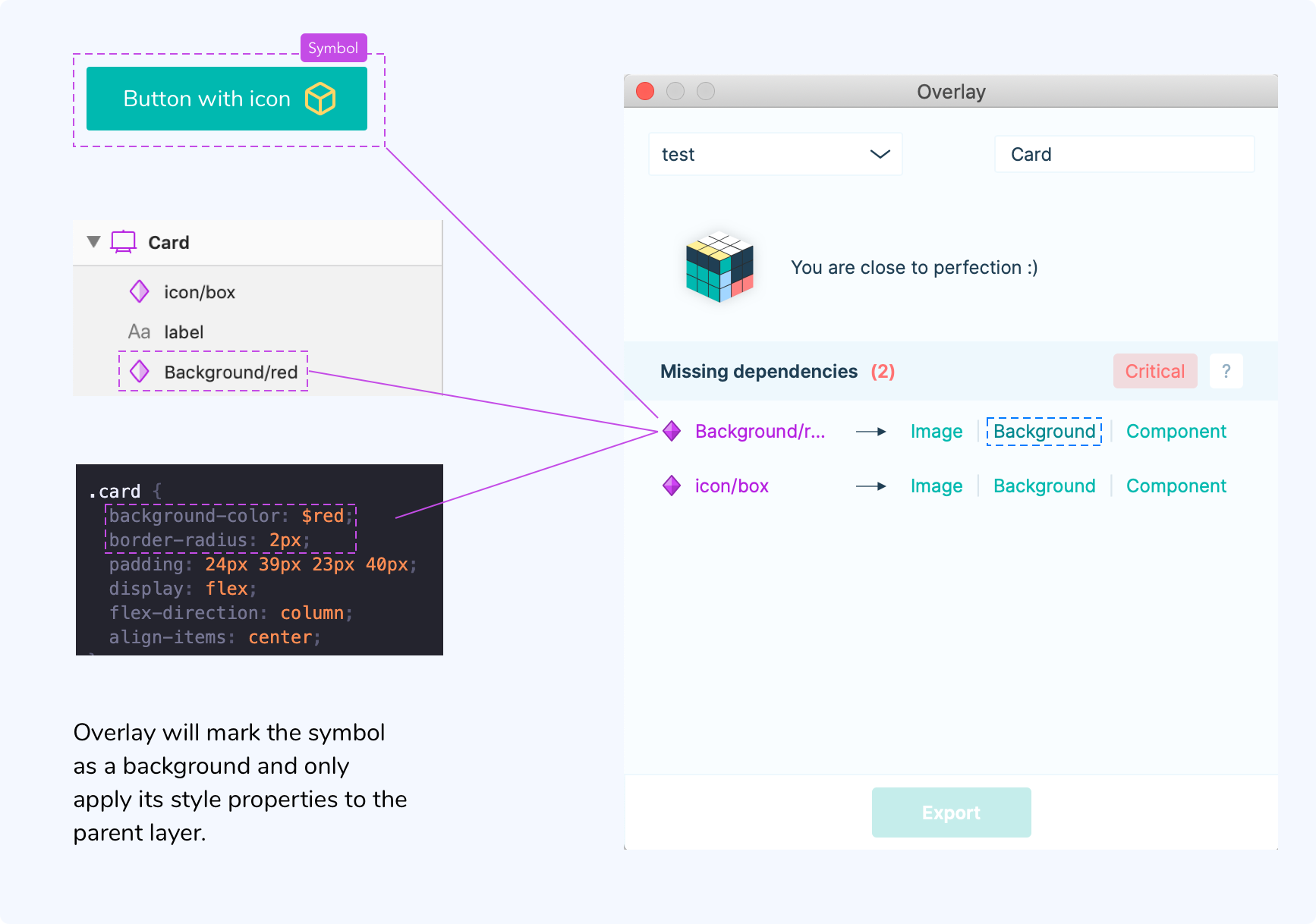 Figma just released a great feature helping designers creating multi-states components. It is going to be something very powerful for Overlay users. We made the first step, Overlay users now can export a component that is part of a Variant.

We also worked hard to help users get even more accurate visual results and a better code quality. Here is what we did : 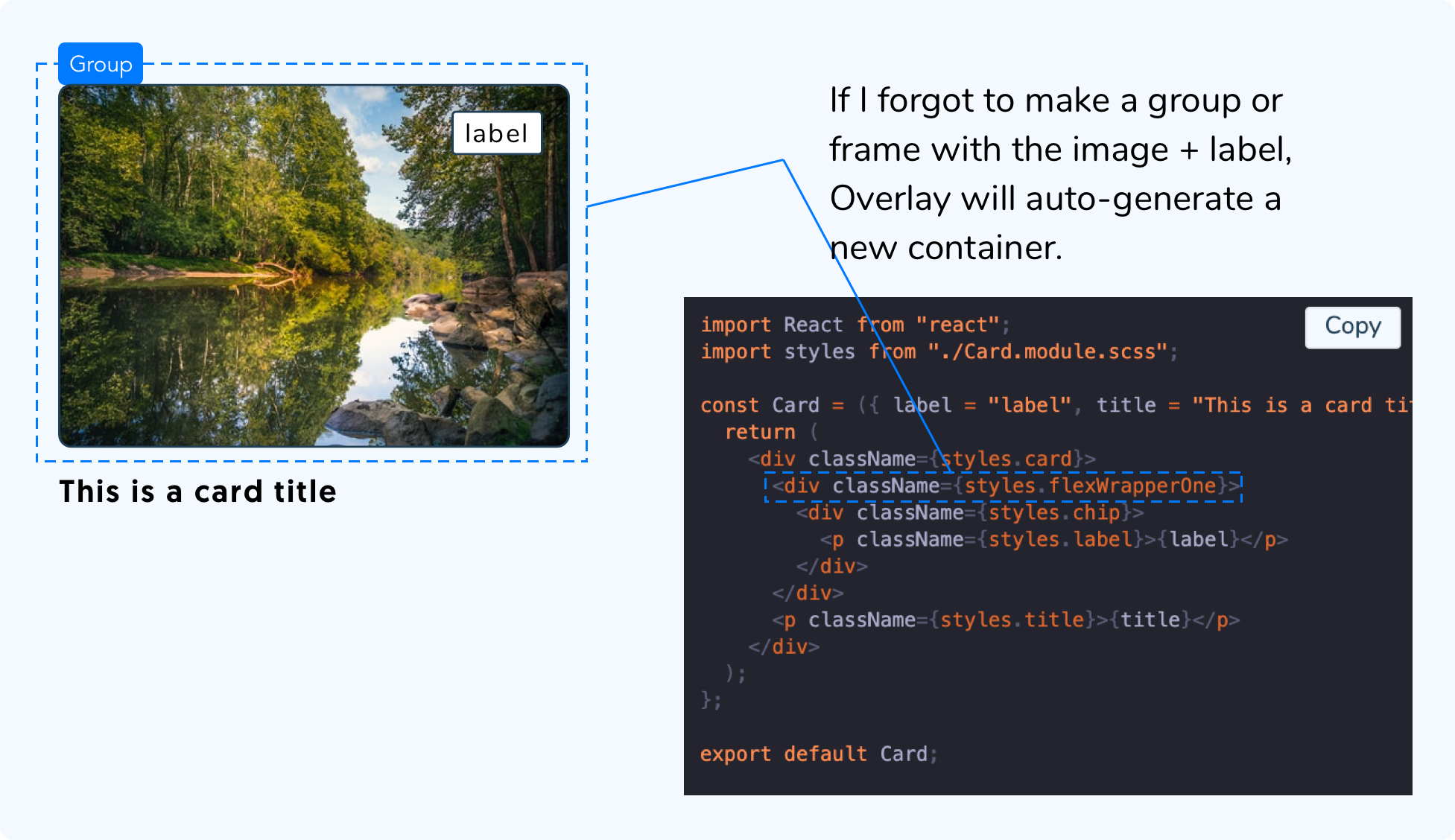 PRICING PLANS FOR EVERYONE, AND EXPORT EXPERIENCE IMPROVED 💎

Since we launched, we have met designers and developers all around the globe with very different needs and budget. And we want to be able to help ALL OF THEM improving their design-to-code processes. We also want our first users to get a very special treatment, as they are so helpful for us with all their precious feedbacks. This why we are so happy to release a brand new pricing policy, as follows :

OVERLAY FOR FIGMA IS OUT 😍

This is now real, Overlay is live, for everyone, in Figma 🍾🍾 These last two months, we have put all our energy to take your feedbacks and prepare Overlay for its journey into the Figma world. We are so excited it has become a reality. Discover our brand new Plugin page on Figma Store 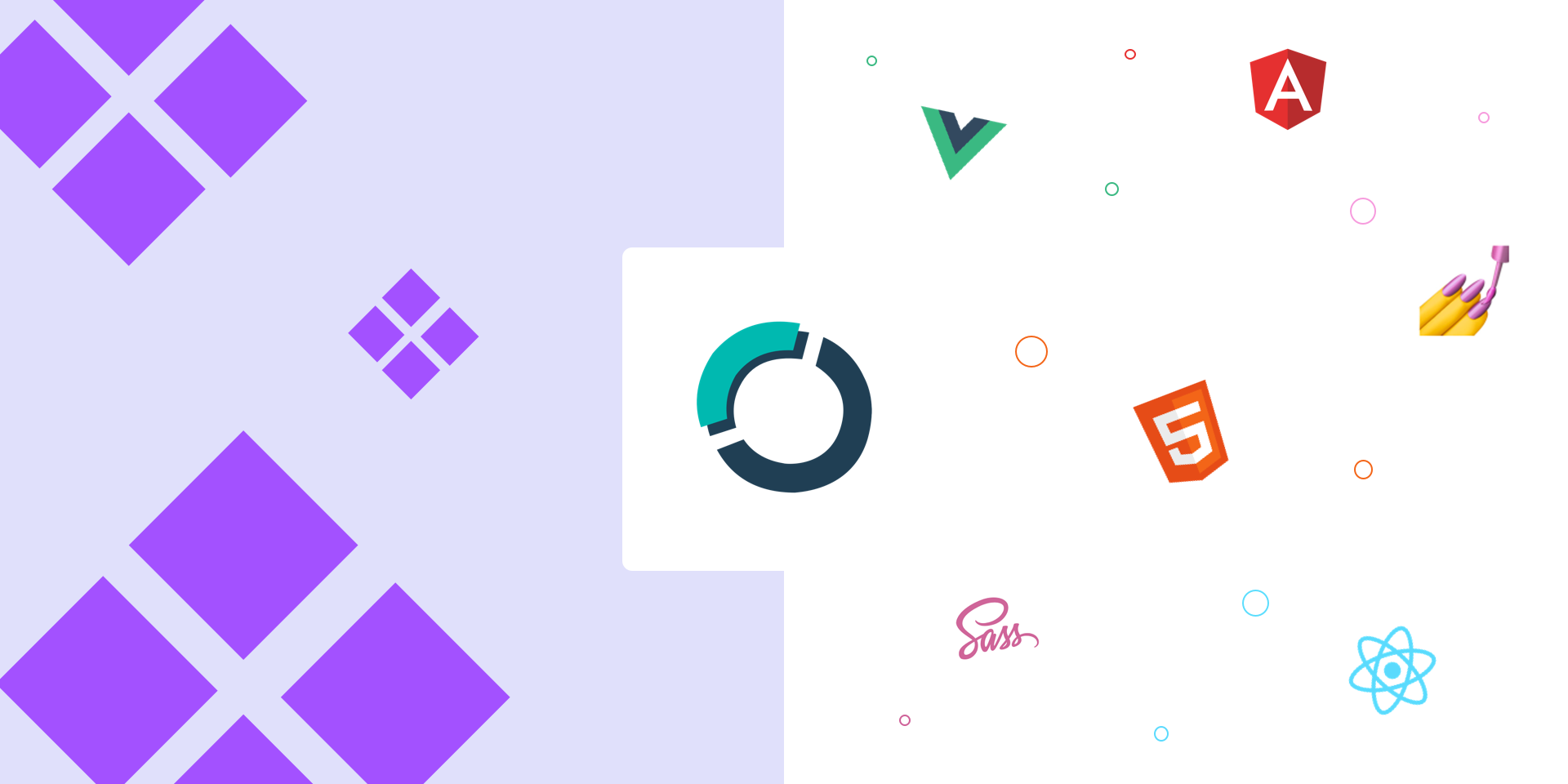 Overlay new users will now start using Overlay plugin on both Sketch and Figma with a great experience exporting a perfect component.

Our React users, for most of them, use SCSS or Styled components for styling. Overlay historically generates React components with SCSS. We are now proud to announce that we now let users generate React components using Styled Components 🤩 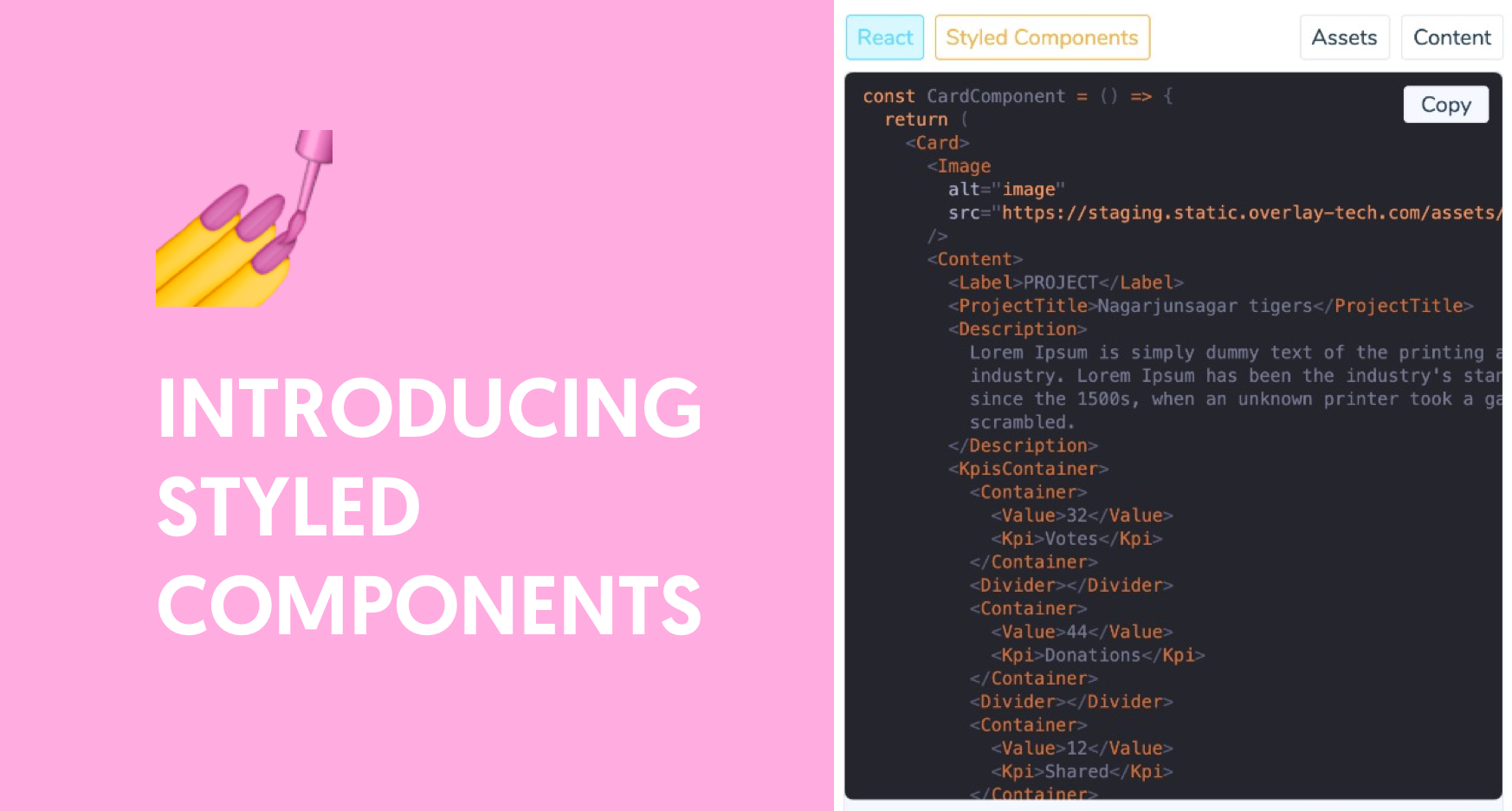 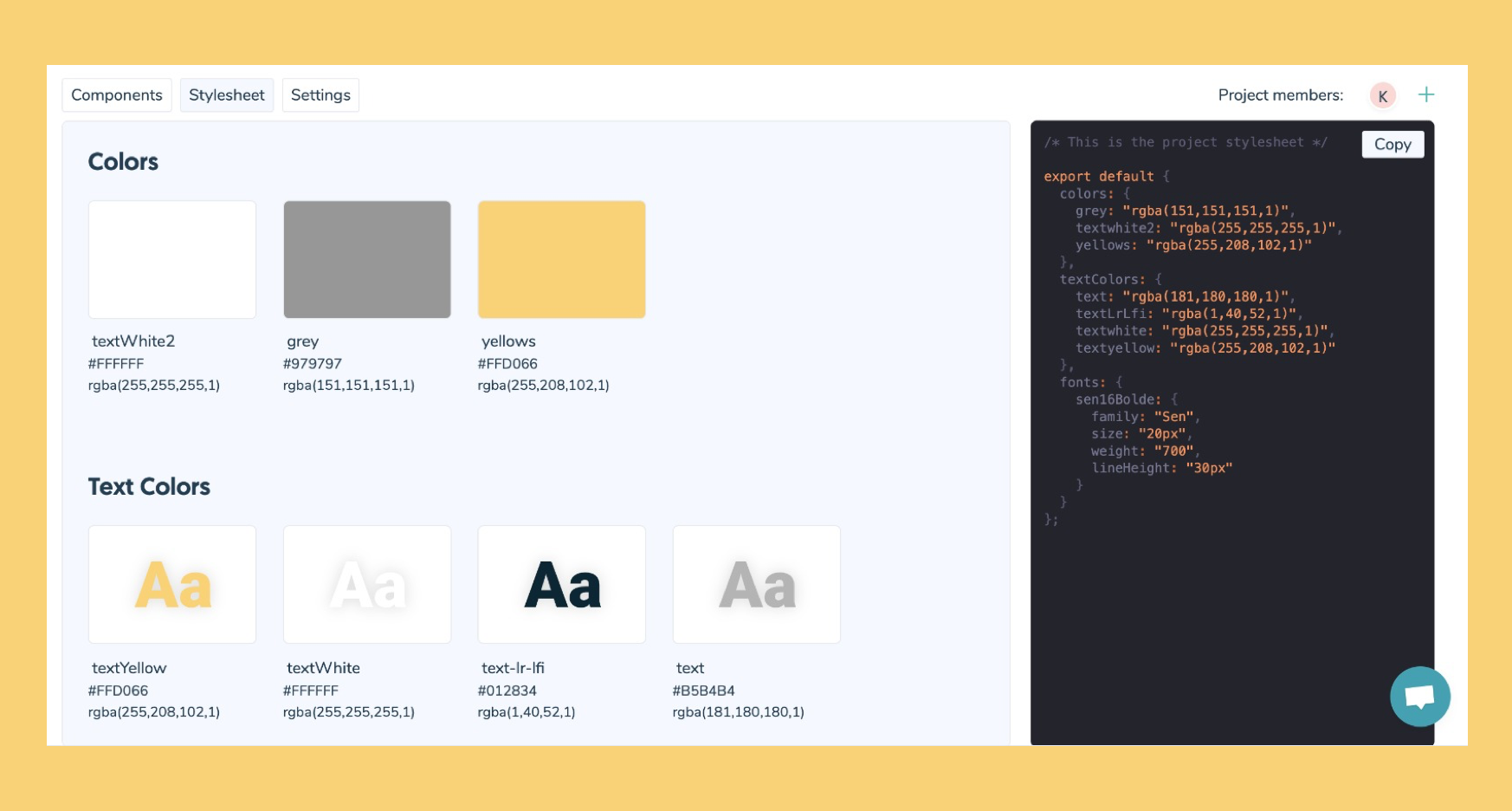 Overlay is the design-to-code tool that delivers the best code quality as long as your design is itself well organised. Overlay FAQ is a series of content notes to help you start with Overlay and become an expert. It contains : 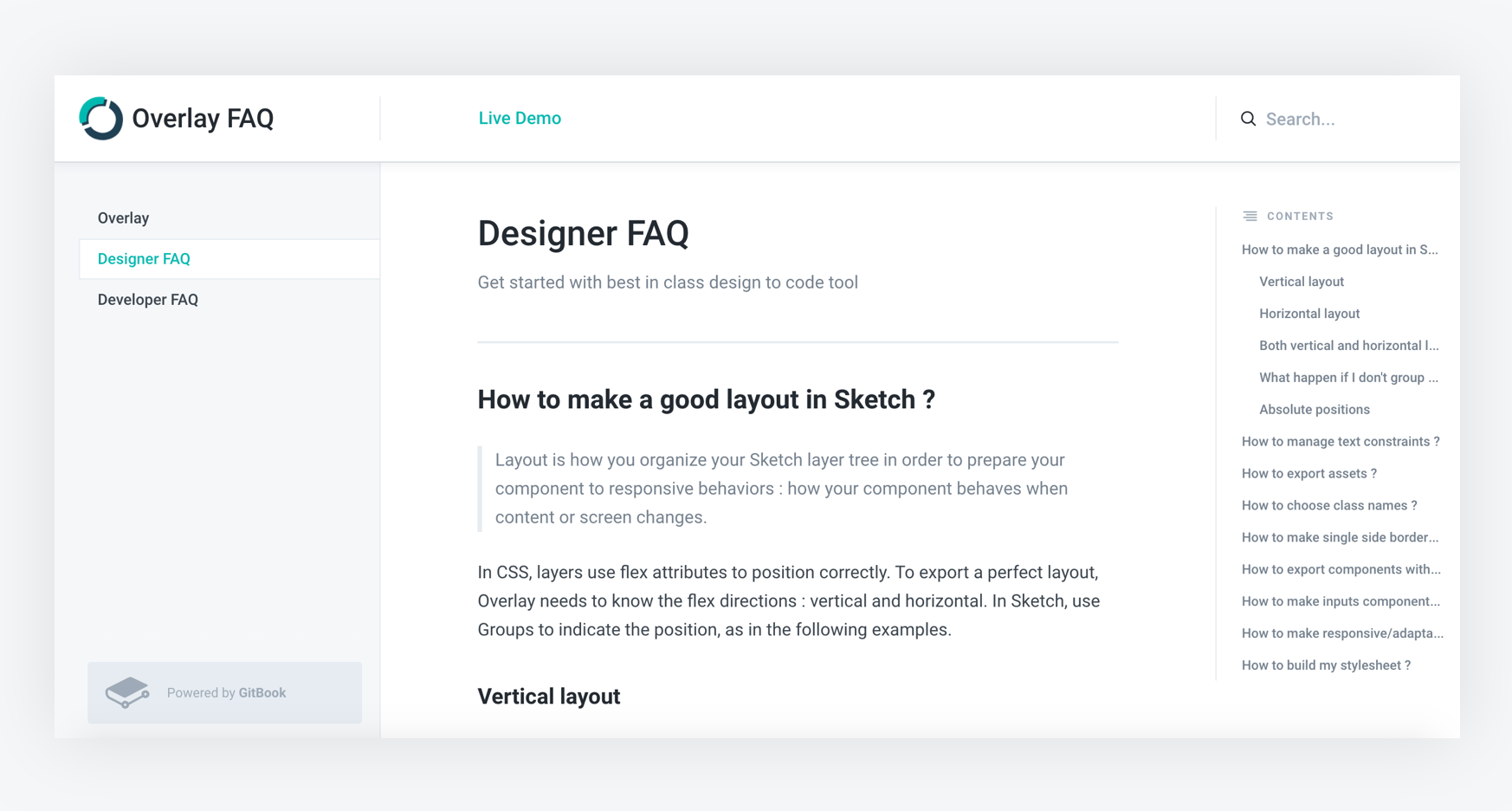 Overlay new users will now start their journey in the design to code world with a brand new onboarding to help them create great components for their first try. It contains : 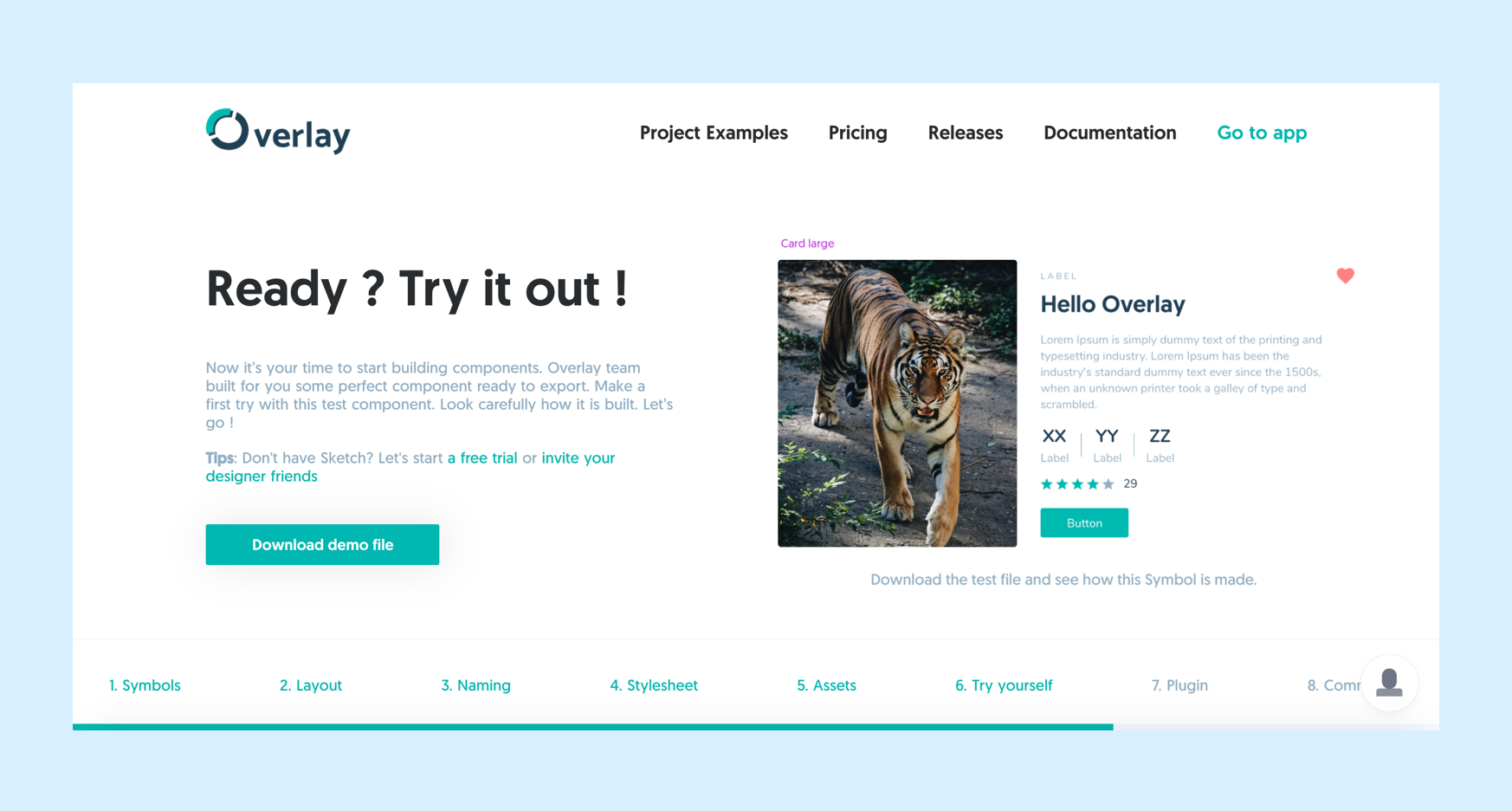 Designers in Sketch often have naming conventions for their symbols that are not development related. For example, a card component in Sketch can be named molecule/desktop/card. To be more flexible, it is now possible to rename your components in Overlay :

ORGANISE YOUR DESIGN SYSTEM INTO CATEGORIES 🕺

A great design system has to be well organised to help developers use it easily. This is why we introduced a new "categories" feature into Overlay projects. Here is the full list of new features added :

We also focused this week on correcting some edges cases and bugs on latest features.

Many users ask us to use OVERLAY to integrate design in different dev stacks. After our two historical target frameworks REACT and VUE.js, we decided to add a new export option : Vanilla HTML/CSS.

TEST YOUR COMPONENTS IN OVERLAY APP 💪

This week, we focused on developer and designer experience using Overlay. To produce great components, it is important to be able to test it live, and see how it behaves. First step, let overlay users change its content.

With this new feature, Overlay users can test their components by editing its text content.

This week Overlay goes further into dynamic components generation from Sketch with inputs generation ! This is a first step and an open door to a range of new features (buttons, select box, progress bars etc..)

With this new feature, designer can now generate inputs field in Vue.js or React directly from Sketch.

It is now possible to :

How to use it ? It's simple. To tell Overlay that a section or group is a type input :

Most of UI designers use symbols in Sketch, and very often they make compositions of nested symbols. Example : a button symbol used in a card symbol. So far, Overlay did generate only a placeholder for dependencies. Now it does it like a boss :

After launching our Beta version two weeks ago, we got a lot feedbacks and worked hard to improve Overlay thanks to them. For the last twos weeks, we focused on component test and preview, and assets download.

In app preview and new component page with assets feature 👁🌁

The new component page is live ! This space will be fully dedicated to your component : test it live, change states and props, download assets, rename classes and assets.

Starting with, this week :

Since the React 16.8 release (hooks release), more and more projects prefer to use functional component syntax. You end up with less code and the code is easier to read. So, we decide to use this syntax instead of class component syntax. 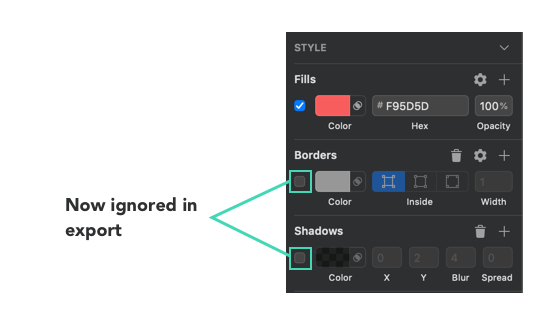 We are proud to announce Overlay Web app is ready for Beta. We have just opened to a first wave of Beta users and are exiting to get their feedbacks soon. For this new release, we gave a spring cleaning to Overlay web app, and added new features to the stylesheet section.

As we did last week with the plugin, Overlay web app is now based on a consistent design system (made with Overlay of course 😍). It is never too early to invest on design !

This is why we reshaped our web app with:

We believe at Overlay that clean code always comes with good and well named variables. It has become a key feature in Overlay app, and this week we gave it a new look and experience:

Our React users, for most of them, use SCSS or Styled components for styling. Overlay historically generates React components with SCSS. We are now proud to announce that we now let users generate React components using Styled Components 🤩

Overlay is the design-to-code tool that delivers the best code quality as long as your design is itself well organised. Overlay FAQ is a series of content notes to help you start with Overlay and become an expert. It contains :

Overlay new users will now start their journey in the design to code world with a brand new onboarding to help them create great components for their first try. It contains :

Designers in Sketch often have naming conventions for their symbols that are not development related. For example, a card component in Sketch can be named molecule/desktop/card. To be more flexible, it is now possible to rename your components in Overlay :

This is why we reshaped Overlay plugin with :

Before displaying naming errors, Overlay plugin now makes a dry run of the component. It generates code, and check which class really needs to be properly named. Designer has to rename only the layers that will be used in the code.

They don't have to rename the following layers :

Designers can now rename their layers and correct errors (default names, and duplicate names) directly inside the plugin. Can't be easier ! 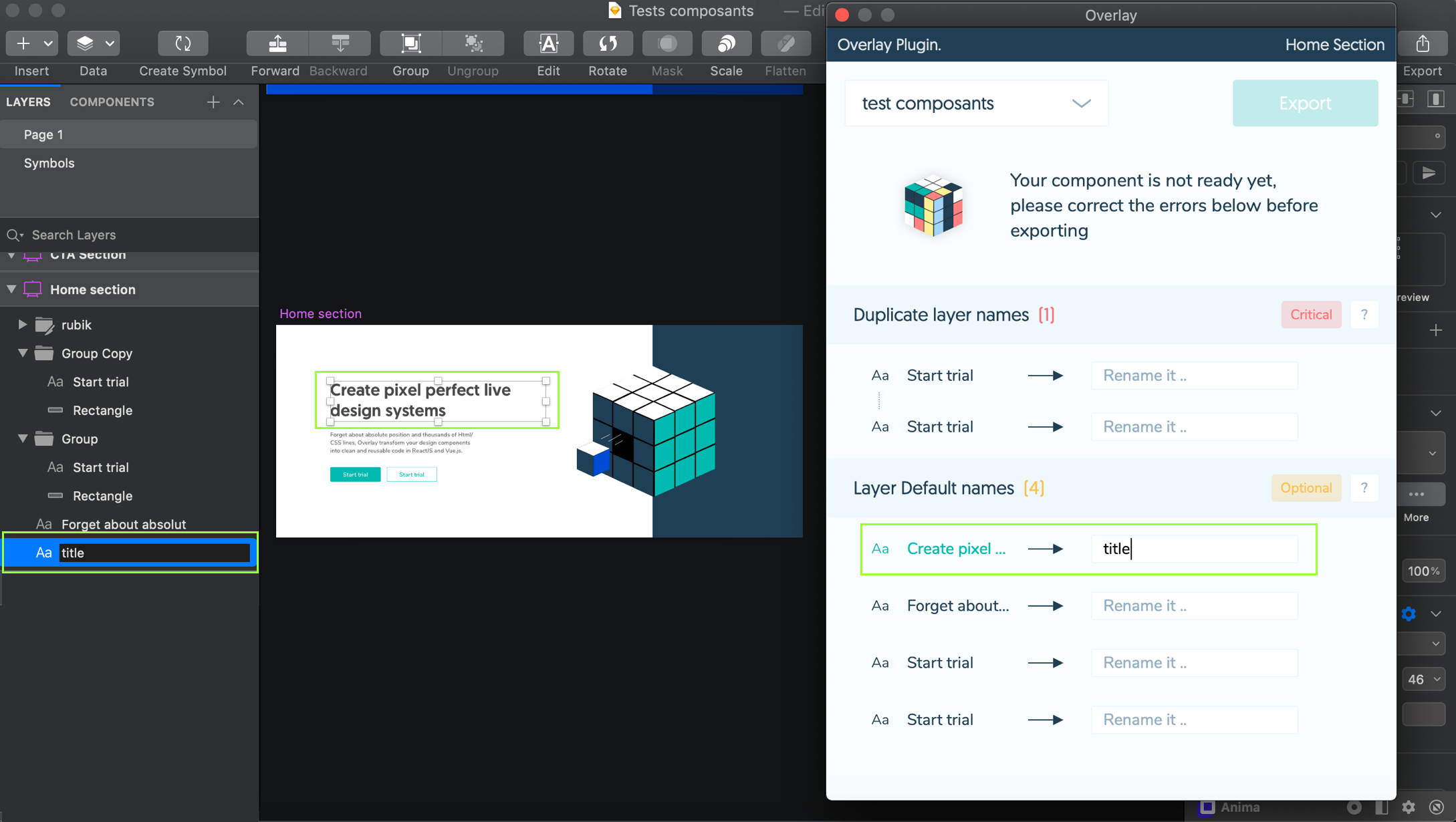 Overlay use margin for positioning children inside a container which is what developers did in most of the cases. But margin are not always the solution, with flex layout developers can define dynamic behaviors. To help design teams to build dynamic layout, Overlay can now use space-between property !

Designer can now use sketch resizing constraint to specify if they want to make the layout responsive !

To specify a space between you have to :

And that’s it 🎉 ! You can also make the same thing for column layout with pin to top and pin to bottom. 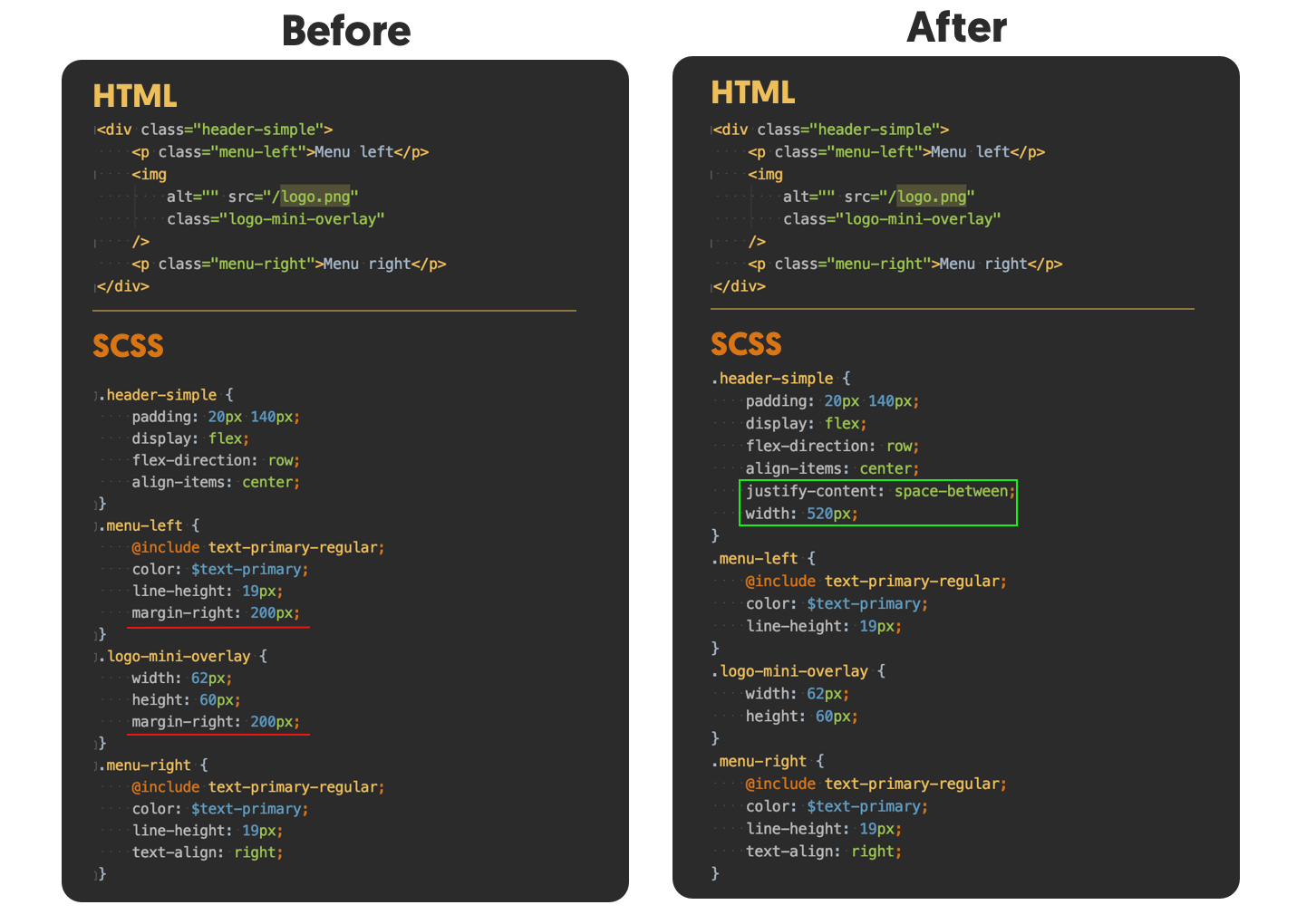 As you can see, for now, Overlay generate hard-coded <strong>width</strong> in this case, developers can change it to percentage property to add dynamic layout to the parent too :) Soon we will add this feature in Overlay.

Now Overlay group together class with the same style 🎉 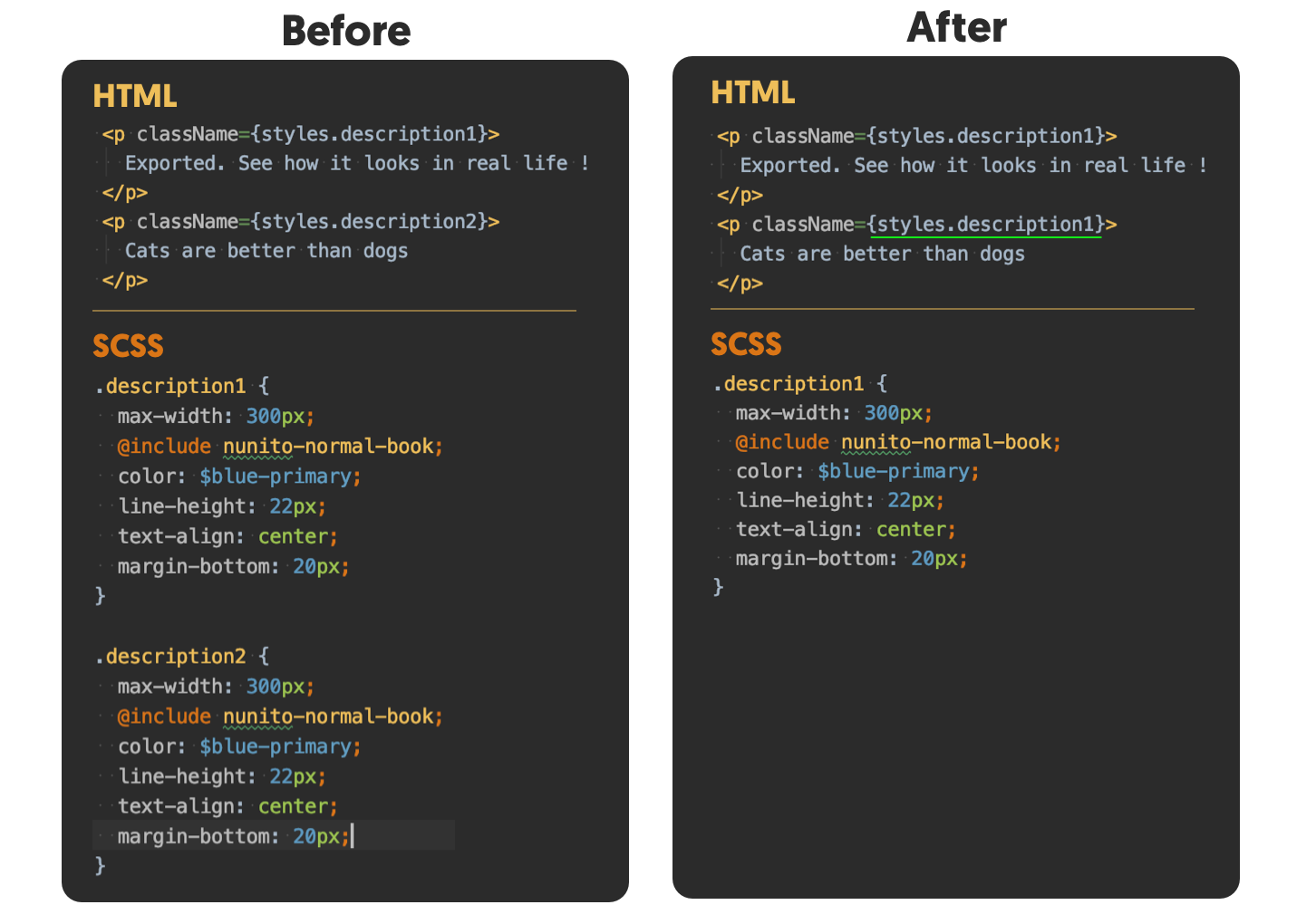 We use the first css class name found to change all the other occurrences.

The last of type optimization

Moreover, when we find a way to use last-of-type to group layer we use it. 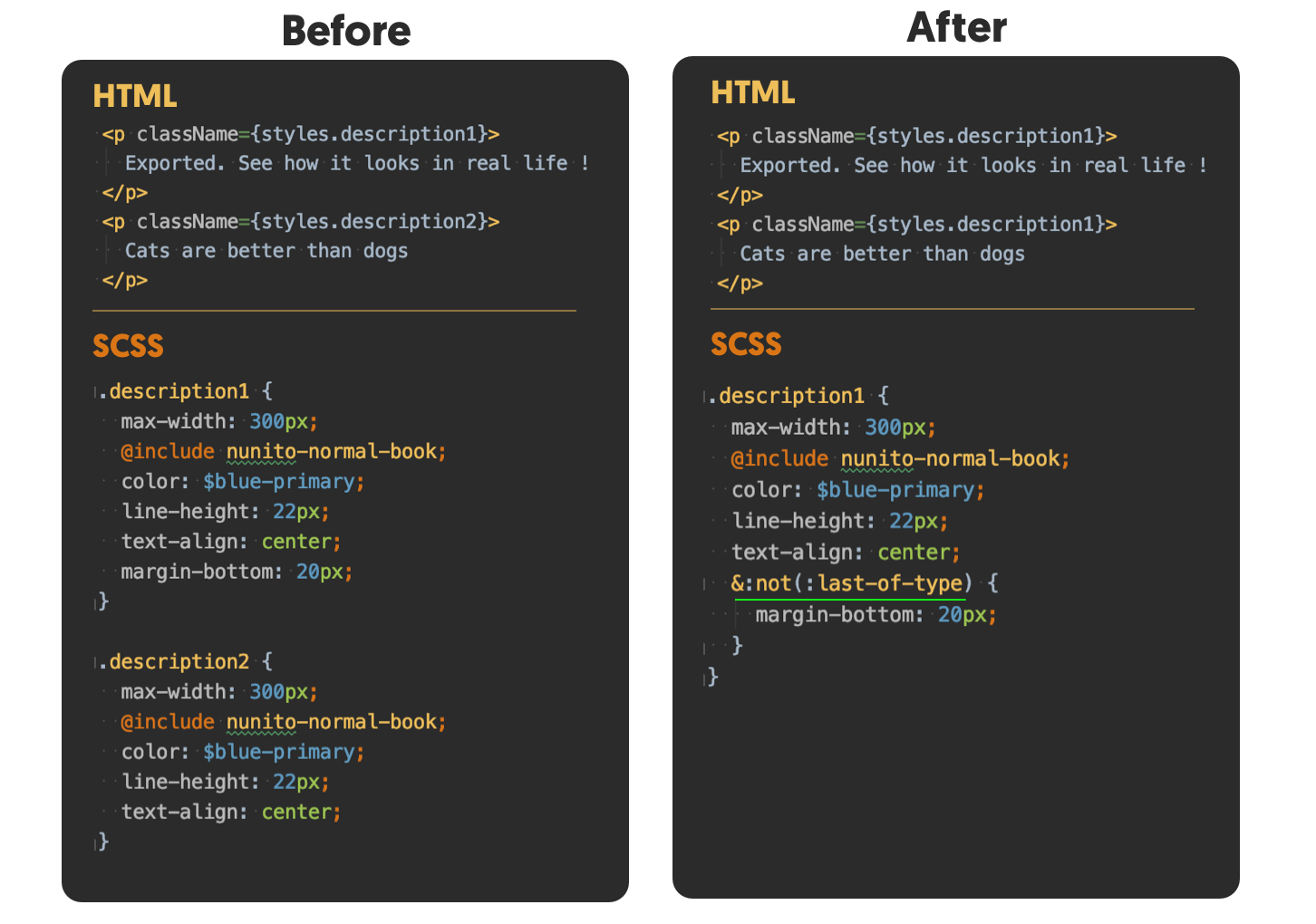 With these two optimizations we reduce the amount of code produced by 15% to 20% #lean.

Now the component preview use css class instead of inline-style, our goal is to make the preview closer to the generated code.

Overlay by default generated width property on all paragraph, this behavior create rework because very often developers don’t need this property or use max-width property instead.

In sketch, there is 3 ways to specify text behavior :

We will continue to improve this functionality, don’t hesitate to give your feedback on it.

We are very excited to ship our first beta version ! You can now request access and start creating ReactJS and Vue.js components from Sketch ! 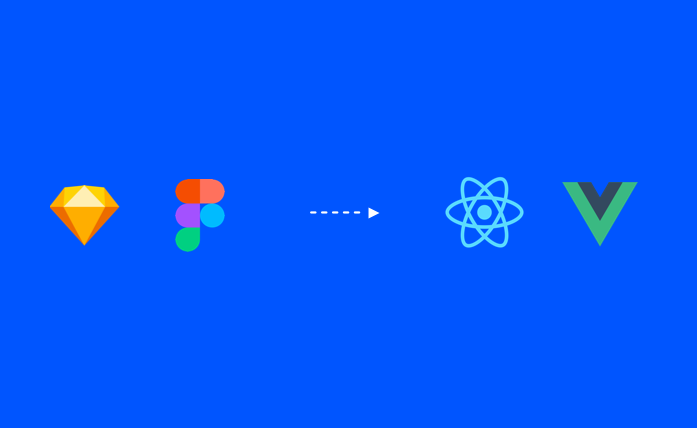